Lines of Code in application source is one of the most common metrics associated with software development projects, mainly  to measure productivity.

How to Count Lines of Code in Visual Studio?

There are various tools available to Count the Lines of Code (LOC) in .NET solution.

But many developers may still not be knowing that there is a direct tool made available by Microsoft which will help us to measure C# Loc,VB.NET Loc or in general, count the lines of code(LOC) in any .NET application using visual studio.

The tool is called Code Metrics which available from Visual Studio 2008 and higher versions.

This tool is used to count the Lines of code in a .NET solution.

But this code analysis tool ,Code Metrics, is only available in the Visual Studio Premium and above editions.

Read the post  How to use Code Metrics in Visual Studio Professional editions here.

Code Metrics Tool can be used for calculating the code maintainability index, cyclomatic complexity of the code, coupling between classes, inheritance depth and number of lines of code (LOC) for members and types of a .NET assembly.

So Code metrics tool is meant for determining the quality, extensibility, and maintainability of a software to a great extent.

Usage of the Code Metrics tool is straight forward and easy.

Here in this post, I explain how to use code metrics tool for code analysis from visual studio. Follow the steps mentioned under below headline

Open your .NET solution which you need to count LOC. 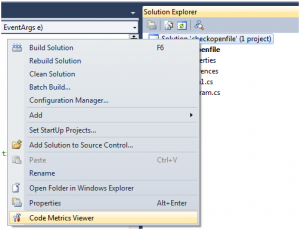 You can see the code analysis report screen as shown below window.

See the brief definition of each of these code quality parameters below.

Cyclomatic Complexity measures the total number of individual paths through the code by counting the number of decision points in the code.

Decision points are if blocks, for each, for loops, switch cases, do, while, etc. The Lower the value of Cyclomatic complexity, better the code is.

Class Coupling is the total number of dependencies the class has on other classes.

Coupling is expected to be as low as possible to avoid dependency among classes. If the dependency is more classes are called tightly coupled.

Class coupling does not consider the dependency to built-in primitive types such as Object,Int32, string etc.

The depth of inheritance of your code indicates the number of types that are of the specific type in the inheritance hierarchy.

Code metrics helps to get the total number of executable lines of your code excluding white spaces, comments, braces, types and namespaces and the declarations of members.

Lower the number of lines of code in your application better your code.

In this article we covered using visual studio to count lines of code in a .NET solution. With the tool Code Metrics in Visual Studio you can measure C# LOC or count the lines of code in any project within Visual Studio Ultimate edition. We hope you understood and enjoyed the article. I would like to have your feedback in the comment section below.